Taiwan U-18 NT lost 95-80 to Lebanon today in Tehran, Iran and was knocked out of the quarterfinal round of FIBA Asian U-18 Men's Championship for the first time in history.

Taiwan finished with one win and two losses in its preliminary games and failed to qualify. It lost a double-overtime heartbreaker to the Philippines 106-105 in the opening game and routed UAE 89-54.

Lin Li-jen paced Taiwan with 20 points while Chou Po-cheng and Lee Ming-hui each socred 18 but Taiwan was unable to match up with Lebanon, which has five players over 200cm on its roster. Taiwan trailed 46-33 at halftime.

In the 35-point win over UAE, Lee Ming-hui led Taiwan with 18 points and Shih Chin-yao had 15 points.

Taiwan now as to play in the 9-15 classification games. Teams advancing to the guarterfinal are: China, South Korea, Lebanon, Japan, Kazakhstan, Philippines, Syria and host Iran.

According to FIBA Asia… 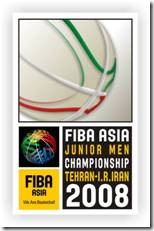 Philippines went ahead 28-16 at the end of the first quarter, but that was the only time in the entire game did any team manage to hold a sizable lead.

Taipei fought back gallantly to outscore Philippines in all the three remaining quarters. The East Asian nation, who had finished fourth at Urumqi two year ago, went into the lead for the first time in the game (78-76) only with 3:15 left in the game.

The battle of nerves continued as both sides fumbled in the final moments to seal the issue in regulation.

After the first five minutes of extended time failed to break the dead-lock, Taipei raced ahead 104-98 riding on Lee Ming-Hui’s back-to-back baskets.

But Philippines fought back to regain the lead when Gabriel Banal converted both his free-throws.

“I think both of us (teams) lost chances to close the game in regulation,” said Philippines coach Franz Pumaren.

“It was a test of character for the boys. I’m happy they held together rather well,” he added.

Philippines went into the first Overtime with four players ejected due to personal fouls and were even worse off at the start of the second extension with six forced to sit out.

“I’m proud of the way my bench rose to the occasion,” Pumaren said.

“I must also give credit to the Taipei team for the way they came back,” he added.

“I’m proud of my boys for the way they fought back,” said Taipei coach Yang I-Feng.

“I hope the boys take the lessons from this game into the next matches in the tournament,” said Chung Kwang-Suk, the head coach of the Taipei Senior men’s team, but in Tehran as the General Manager of the U18 squad.

There was also a tragedy…

Fifty-six of the 83 people on the flight died in the accident, which is still under investigation.

Four members of the Kyrgyz delegation, including the head of the delegation, his son and two players, are understood to have survived the crash.

The plane, a Boeing 737, crashed near the Kyrgyz capital of Bishkek soon after leaving Manas International Airport.