Sanders, Thomas to give SBL a new look 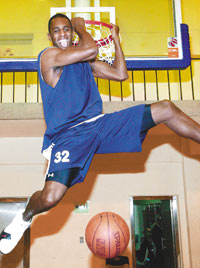 Jonathan Sanders and Delvin Thomas, the only two import players who will play in the SBL next season, were featured in local Ming-shen Daily Sunday. The arrival of Sanders, who will play for Videoland Hunters, and Thomas, who joined ETSN Antelopes, is expected to give the SBL a new look in the new season.

Both of them have been practicing with their teams for a while and will be paid US$ 6,000 monthly. It's not good, but Taiwan is a good and convenient place to live and has a good reputation of paying foreign players. I guess that balanced the salary somehow.

Sanders attracted Hunters' attention when he played with Niigata Albirex in the APB tournament in August. Niigata did not play well in the tournament but Sanders had a couple of big games in the tourney. Hunters targeted 6-7 Sanders, a St. Mary's (CA) graduate, for his ability to play inside and out, his explosiveness to the hoop and positive attitude on the court.

(Excuse me for a mistake in the prevous report. Sanders played for Niigata Albirex in the APB, not LG Sakers.)

It didn't take long for Sanders to be popular, Ming-shen Daily reported. Fans asked for autographs and brought Sanders gifts after his third practice with the team.

"I want to bring the Hunters back to a top four finish and preferably a championship, " said Sanders, who idolizes Magic Johnson growing up.

Hunters coaching staff is not disappointed either. Lin Jia-huang and Hsiung Jen-jen, Hunters' assistants, described Sanders a player with unselfishness, good court vision and passing ability, something not usually seen in imports.

"But he is capable of taking over the game if he has to, " the coaching staff said.

With a 6-9 wingspan and a muscular body, Delvin Thomas will be asked to dominate the paint offensively and defensively for the Antelopes, which has been weak in the middle.

Thomas surprised his new boss and teammates in the first practice, smashing the backboard with one of his powerful dunks. ETSN, which has to rent for practice facility due to lack of a home court, had to compensate for the backboard. But the team was more than happy.

"That obviously showed his determination and attitude, " an ETSN coach said.

Thomas, who graduated from Bethune-Cookman, also set a goal of bringing the Antelopes back to top four. He credited former NBA great Tim Hardaway, who played with Thomas in the ABA last year, for teaching him many things on the court.

ETSN head coach Chiu Da-tsun believed Thomas will be a valuable addition for the team because of his experiences in Germany, Puerto Rico, Dominican Republic, Finland and minor leagues such as the ABA and WBA.

The 2006-07 SBL season will not begin until after the Doha Asian Games, which means the opening night of the regular season may fall on 2007. Sanders and Thomas will have a lot of time getting to adjust to a new environment and their teammates.
Labels: SBL

Examine the position of Taiwanese basketball

So here we are. Nearly five and a half years after the total shakeup of Taiwan national team and a silver medal it won in Osaka East Asian Games (EAG), what has Taiwanese basketball become?

Is it better because of the youth movement that dropped the veterans a couple years earlier? Is it worse? I guess the answer is the latter.

Let the numbers talk first. Take a look at how it did in recent Asian tournaments.

Taiwan did finish in the top three in the 2001 and 2005 East Asian Games (winning gold in Macao) and the 2004 Stankovic Cup. But those tournaments were considered second-tier in the region with stronger countries sending their second national teams or junior teams.

On the junior side, making to the semifinal this year was its best performance in six years.

The performances obviously did not justify or reveal the real strength of Taiwan, one of the most basketball-crazy countries in Asia.

It makes you wonder why a team with these players failed to live up to its potentials. Taiwan national team boasts Chen Hsin-an, who was dubbed in 1998 as one of the most promising young players along with Yao Ming and Yuta Tabuse and became the first Taiwanese invitee in the NBA pre-season training camp in 2002 with the Sacramento Kings and the Denver Nuggets in 2003.

The team has 202cm forward Tien Lei, who has as quick a jump as you can imagine and a soft shooting touch rarely seen in big men. Tien was in Kings’s summer camp in 2004.

The team also has 204cm center Tsun Wen-din, who many foreign teams expressed interests, and 204cm center-forward Wu Dai-hao, who just completed his first year with BYU-Hawaii, a Division-II school in the United States.

In addition, the team has 192cm dynamite Lin Chi-jay, the reigning SBL leading scorer who can break down opponents with his explosive first step and crossover moves and knock down jumpers consistently from 20 feet.

The players have been playing together year round, so chemistry will not be a problem. And obviously they belong in the most talented group in Taiwanese basketball history.

Which brings us to the issues of coaching and training. Lee Yun-kwang, head coach of Yulon, took over the national team in 2001. At the time he was a young coach who didn’t have any head-coaching experience and was still learning the nuances of coaching.

For a young and inexperienced team like Taiwan, it needs an experienced head coach to develop players as well as getting good results in the international competition. The reason is simple, there’s no time to let the coaches and the players to learn at the same time. At least that’s my theory.

In terms of training, the CTBA (Chinese Taipei Basketball Association) failed to organize an effective and professional national team program. All it did, it seemed to me, was send the team overseas and see what happens. Taiwan NT always went to China, Korea or the U.S., scrimmaging with second-fiddle American players or playing Chinese and Korean teams without purpose.

After the long road trip, players either got hurt or got sick of basketball by the tournament started. It was partially why Chen Hsin-an missed three straight Asian Championships and why the team always entered the major Asian tournament with incomplete lineups.

Without good coaching, training program and scouting, Taiwan NT always lost the most important preliminary games that would have sent them into the final eight in the Asian Championship, dropping heartbreakers to countries such as Iran and Kazakhstan.

To sum up the position of Taiwan NT, their defense sucks. They are afraid of playing physical game and can’t win the important ones either.

The national team program of Taiwan national team should come back to square one and start from the fundamentals. The quick solution, in my opinion, will be hiring a seasoned foreign coach. Give him all the resources and authorities he needs and at least two to three years.

Otherwise, it will be very hard for Taiwan to be in the top eight in Asia, let alone top four.
Labels: men's nt

Jonathan Sanders and Delvin Thomas will be the only import players in the next SBL season due to a special import-hiring system the league applies.

In order to achieve the "balance of power, " the SBL claimed, the league will allow non-playoff teams to hire import players starting in the 2006-07 season. Which means ETSN Antelopes, Videoland Hunters and YMY are allowed to hire one import player.

However, hiring import player is an optional decision. YMY decided not to hire imports due to small budget, making ETSN and Videoland the only teams with import players next season.

Jonathan Sanders, who played for Korea's LG Sakers in the APB tournament which was played in Taiwan in August, signed with Videoland at about 6,000 USD per month. ETSN signed Delvin Thomas with about the same price last week.

25 year-old forward Sanders graduated from St. Mary's College and lastly played in Lithuania. He did not sign with LG.

6-7 bruiser Delvin Thomas, 28, played in Puerto Rico, Dominican Republic, ABA, and WBA after finishing college career at Bethune Cookman. He was tested by Finland's Pyrinto Tampere but did not sign.

The 2006-07 SBL season is expected to tipoff in December after the Doha Asian Games.
Labels: SBL

Taiwan NT lost to LG Sakers in its sixth of eight warmup games in South Korea Sunday for the preparation of the Doha Asian Games. Taiwan was 2-4 after six games.

Taiwan NT will have an off-day on Monday and meet Kyung Hee University and Yonsei University on Tuesday and Wednesday.
Labels: men's nt

Taiwan NT dropped its first warmup game in South Korea 99-89 to SK Knights in Seoul Monday due to fatigue after the flight. Lin Chi-jay led with 24 points while Chen Hsin-an and Tsun Wen-din each scored 15 points.

Taiwan NT suited up 10 players for the game. Forward Lee Chi-yi hurt his ankle in the practice and did not play. Tien Lei, who was diagnosed a stress fracture, stayed home and did not make the trip.