CTBA reaffirmed the appointment of Chou Jun-san as the Taiwan men's national team head coach as local media reported that a local sports firm was pressing the association to hire a foreign coach.

**Chang replaced Cathay Life's Hung Ling-yao, who resigned from her post citing family business one week after her nomination, as the head coach. Chang will be making her debut as the NT head coach. 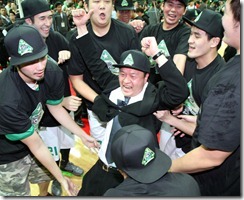 Taiwan Beer beat Dacin Tigers 83-78 in overtime in Game 5 of the 2011 SBL Finals Friday night to win its third title in team history and its first title in three years.
Taiwan Beer, which won the best-of-seven series 4-1, won its first title after completing a back-to-back title run in 2007-2008 with its head coach Yen Chia-hua becoming the first SBL coach winning three titles.

I'm sorry for not posting anything to the blog for almost the entire March. I visited New Zealand for 10 days for a business trip and the heavy work load had kept me from writing basketball regularly.

I begin to wonder whether I should stop posting those game stats, which took me a lot of time, because the SBL now (finally) has an efficient stats webpage where you can find anything if you can read Chinese.

The final decision has not been made yet. The most important thing is whether I will have enough time to keep writing the reports I have been writing for more than 10 years. However, I do think that there should be someone writing about Taiwanese basketball in English regularly so local basketball can be understood and recognized by English-speaking fans.

As I write now Taiwan Beer and Dacin Tigers have booked their appearances in the 2011 SBL Finals. On paper, TB is too strong to lose in a best-of-seven series, given that it features almost half of the national team lineup.

However, I have made it a habit not to support teams which only improve themselves by accumulating top players. My love goes to teams like Butler or VCU, lesser known teams or underdogs. That said, I hope Dacin can pull off an upset to make local basketball much more excited.

The best-of-seven Finals will be played from April 8-17 at Hsinjhuang Stadium in New Taipei City.

The two teams will meet in the finals for the third time after splitting the previous two meetings with Taiwan Beer defeating Dacin 4-2 in 2007 and Dacin winning 4-3 in 2009.

Led by star forward Tien Lei and import Alexus Foyle from St. Vincent and the Grenadines, the Tigers made the playoffs as the No. 3 seed after a 17-13 regular season and upset the No. 2 seed Pure Youth in five games.

Dacin will be looking for redemption after losing to Yulon Luxgen 4-2 in the title series last year.

Taiwan Beer, which led the seven-team league in the regular season with 22 wins and 8 losses, swept the defending champion Yulon 4-0 in the first round and was able to enjoy an 11-day rest before Game 1 of the Finals.

The regular season champion, which won back-to-back titles in 2007-2008, advanced to the finals for the first time in two years. It features arguably the best lineup in the league which includes American forward Emmanuel Jones and local players Wu Tai-hao and Yang Ching-min.

The SBL, the top tier basketball competition in Taiwan, was established in 2003. Yulon won four titles in the league's first seven years.