Taiwan finished as runner-up for the second time. It lost to Korea two years ago in the inaugural AUB.

The home boys failed to cut down on their turnovers once again after squandering a 23-point lead in a upset loss to Iranians in the preliminary round. Taiwan committed 22 turnovers in the final game as Iran pulled off a 15-4 run in the final three minutes for the victory.

Wu Tai-hao had 13 points and 11 rebounds and Lin Ching-pang had 11 points and 8 boards.

When Taiwan meets Korea on the basketball court, you expect something interesting to happen, which was the case in the cross-over semifinal. The game was stopped three times because of confrontation, protests and near-brawls. It ended with six disqualifications -- four for Taiwan and two for Korea -- and 59 foul calls.

Taiwan beat Hanyang Univ. 88-80 thanks to Chen Shun-hsiang's 34 points and the 26 for 30 free-throw shooting as a team. Wu Tai-hao, who had a techincal and fouled out of the game, had 14 points, 7 rebounds and three blocks.

Wu Tai-hao dunked on a Guangdong University of Technology defender. 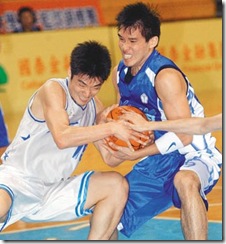 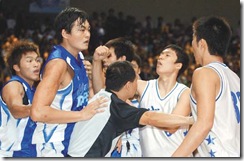 Chaotic scene in the Taiwan-Korea game.

"Shan" means "mountain" in Chinese. In the past years, Nanshan and Haishan have become two mountains that are difficult for their opponents to conquer, with Haishan winning three straight women's finals and Nanshan taking home two men's titles.

The new season will start with the Northern Division preliminaries, which will be played in Nanhu High School in Taipei from Oct. 13-19. Eleven of 15 teams in the division advance to the second round. Five of the seven teams in the Southern Division advance to the second round after a preliminiary round in Fengshan Vocational High School from Oct. 15-18 in southern Taiwan.

The 16-team men's second round will start Dec. 25 in Banciao, Taipei. Women's preliminary round will start on the same day and conclude on the final day of the year. Organizers decided to push back the women's schedule because Taiwan will be sending its national team to the Asian U-18 Women's Championship in Indonesia in Novermeber.

The second Asian University Men's Basketball Championship will be played in Taiwan from Oct. 11-16 2008 as six teams from Taiwan, China, Korea, Lebanon, Iran and Hong Kong will vie for the ultimate crown of Asian collegiate basketball.

All games will be played at the stadium of the Chinese Culture University in Yangmingshan, Taipei.

Korea won the title in the first edition of AUB in 2006.

For the upcoming 2nd Asian University Men`s Basketball Championship to held from 11th to 16th Oct. 2008, six teams from China, Hong Kong, Iran, Korea, Lebanon and the host Chinese Taipei finally confirmed the participation in it. Therefore, the two-group competition system will not be used. The competition system will comprise of two stages: Preliminary Round and Medal Games.

In order to create the compeition schedule, a seeding format will be adopted. First, the first four slots were placed according to the finishing order among the teams previously participating in the 2006 Asian University Men’s Basketball Championship. Then ,the remaining two slots were filled in by the order of entry confirmation for those teams which didn’t participate in the 2006 Asian University Men’s Basketball Championship.

All the competitors for this Championship must be born between January 1, 1984 and December 31, 1990.

-- Competition System: The system comprises of two stages: Preliminary Round and Medal Games.
-- The Preliminary Round: The format will be a single round-robin competition, as each team will play all the other participating teams in the Preliminary Round.
-- Medal Games: The teams ranked 1st and 2nd in the preliminary round will play for the Gold Medal game, while those ranked 3rd and 4th places will play for the Bronze Medal game.
-- Seeding Format: The first four seeds were selected according to the finishing order among the teams participating in the 2006 Asian University Men’s Basketball Championship. The remaining seeds were filled in by the order of the teams confirming their entry.

Local news outlets reported that the SBL Committee had rejected the broadcast right fee offer from ESPN Taiwan and Videoland, the league's broadcast partners in the past five years and hold the negotiation priority, and did not rule out opening the bid.

ESPN Taiwan and Videoland upped their offer from NT 39.2 million to 42 million, but the number was still far from SBL's asking price of NT 56 million.

ESPN and VL lowered the offer because of the expenditure in the next season is expected to rise. Without a venue to play in Taipei, the SBL was forced to play in other cities in the 2008-09 season.