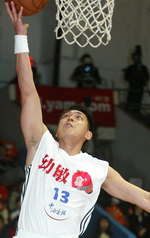 Min-sheng Daily reported that Lo Shin-liang, the No.3 scorer in the SBL last season with a 20.3 point average, has signed with Taiwan Beer. Lo failed to sign the contract extension with his former team YMY. At Taiwan Beer, he will reunite with his former Sina teammate Chou Jun-san, who was traded to TB from ETSN in the summer.
Labels: SBL
Newer Post Older Post Home