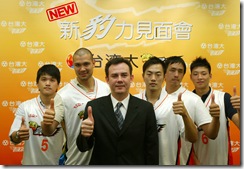 The Clouded Leopards yesterday introduced the newcomers with Geiger drawing the most attention. Geiger (205cm, 105kg), 27, came from Germany. His mother is a Taiwanese but he has to play as an import before receiving a Taiwanese passport -- if he wants to have one.

Taiwan Mobile said it offered a position in the IT section for Geiger, a bioinformation major in Germany, to extend his non-basketball professional career.

I'm happy to know that Jufan finally find his way in Taiwan. I first got in touch with him about an year ago through a German reporter and exchanged a couple emails.

Ouyang Ching-heng, who enjoyed a breakout season last year -- 19.4 points and 4 rebounds per game -- with the dmedia Numen, signed with Taiwan Mobile.

194cm forward Chung Hsiu-nai, the second overall pick in the SBL Draft, will try to learn in a higher level of basketball and live up to his father's name. Chung's father, Chung Chih-mung, was an accomplished basketball coach who has coached Tera Mars in the CBA and Videoland Hunters in the SBL.