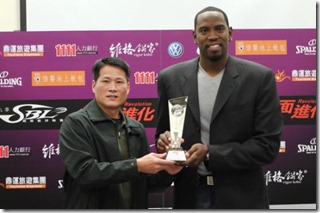 SBL regular season games will resume on February 3 after a three-week long break of the Lunar New Year and Taiwan’s presidential election.

The last game was played on January 8, approximately one week before the January 14 presidential election and later the nine-day Lunar New Year vacation.

A couple of things worth mentions:

==
Former NBA player Noel Felix may not have the strongest numbers on the court, but he helped his team win. And that was why he was named MVP of December and January after averaging 17.6 points and 8.6 rebounds in Dacin’s 7-1 season opening run.

Dacin head coach Chiu Da-tsun praised Felix for his high basketball IQ and strong work ethics as well as his ability to play with his teammates and his easy-going personality. That was about the best comments a player is able to have from his peers and coaches.

==
Some teams are scrambling to find an ideal import player before the Feb. 12 import replacement deadline.

I’m not sure whether KKL is happy with Tim Parham. Word is that the team would release him. Taiwan Mobile head coach Jia Fan has said Dennis Carr would be replaced.

==
The Chinese Taipei Basketball Association (CTBA) and BroSports, marketing company of the SBL, announced that the SBL All-Star Game is back after a three-year hiatus.

A Locals vs. Imports game will be play on Feb. 25 with Local All-Star team meeting a mixed team of seven imports and seven local rookies.

The All-Star Game, as well as the dunk contest, skills challenge and three-point shootout, will be played on Feb. 26.

==
With Lin Chih-chieh and Tseng Wen-ting playing in China, Chen Hsin-an and Tien Lei are probably two of the most notable local star players this season in the SBL.

Chen, who returned to Taiwan after spending two disappointing years in China and signed with Pure Youth, walked out of the slump after the first four games, during which he averaged only 8.5 points.

The 6-5 forward averaged 16 points in his last five games and lead PY to finish a respectable 6-3 record before the long break.

However, observers are really afraid they might have seen the best of Tien Lei, who sat out the entire 2011 season to rehab his knee and calf injury.

The 6-7 forward, who used to dominate the SBL in scoring and rebounding, is averaging 13.8 points and 5.8 rebounds after eight games. The performance is by no means good enough for someone who is able to get a 20-10 every night.