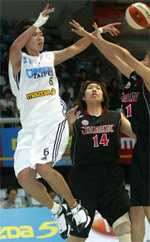 It's been a while since Taiwan Women's NT came home from Doha with silver medals. I apologize for not updating the news in time. Still, let's look back on what has happened in the Asian Games.

Not surprisingly, Taiwan lost to China in the gold medal game 90-59 but it's still Taiwan's best finish in its Asian Games history. And it hung with the Chinese for a period and never gave up before the final buzzer, which was probably good enough and something to be proud of.

Especially when you think about that the men's team took up the majority of resources, such as budgets and media/fans attention, and ended up with a disappointing 8th place finish, Taiwan Women's NT definitely saved the face for Taiwanese basketball.

Thanks to Lin Hui-mei's 13 points, the team trailed by China by only three (24-21) in the first quarter of the gold medal game, which was supposed to be a blowout from start to finish. Lan Jui-yu scored 9 points in the second quarter to prevent the score from out of reach. At halftime, Taiwan trailed 46-33.

The second half was another story, however. China quickly pulled away with its inside advantage. Admittedly, Taiwan was not on the same level with the Chinese.

The forward tandem Chiang Feng-chun (16.3p+6.2rb) and Liu Chun-yi (15.5p+3.5rb), both 25, is the backbone of the team. Both of them shot over 50 percent from the floor in the tournament and were the only players to average in double-figure scoring. Chiang and Liu will shoulder much of the scoriing load in the forseeable future and most important pieces in going for a 2008 Beijing Olympics seed.

Point guard Wen Chi has come of age at the age of 22 and showed promising future. With her dazzling speed and sound fundementals, Taiwan Women's NT can count on her for a long time to come.

Although she's only 170cm tall, Lan Jui-yu is a shooter on the rise who has a big heart and is fearless on the court. 20 year-old Lee Wan-ting also has great potential to be good in the future.

Cheng Hui-yun, who has been the starting center for the team for so many years, was somewhat hampered by her knee injury in the tournament and thus limited her effectiveness. Once receovered, Cheng is expected to be the main inside force again.

And don't forget 35 year-old Chien Wei-chuan, who has been on the national team for almost 20 years. Chien successfully transformed herself from the main scorer on the team to a seasoned veteran who directs offense and keeps her teammates focused at all times. Chien, who said she will not consider retirement until after the 2008 Beijing Olympics, may have lost a step or two but her experience and leadrship was hard to replaced.

Also give credit to head coach Hung Ling-yao, who gave her all to train this squad and now gets the sweet payback. Hung's relationship with the media was always strained but she only focused on what she was supposed to do.