FIBA Asia U18 Women - Taipei rally to down Kazakhstan 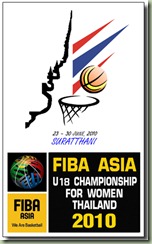 SURAT THANI, Thailand (20th FIBA Asia U18 Championship for Women): Chinese Taipei allowed Kazakhstan to do all the running in the initial parts of their Level I game before picking up their stride for an81-68 win to bring the curtains down for the opening day, on Wednesday.

Lin Yu-Ting scored a mammoth 29 points to lead the Chinese Taipei charge, 12 of them in the first half.

Wei Yu-Chun contributed 15 points, and 11 of them before the first half.

“The girls took time to settle down in the new conditions,” said Taipei coach Chen Mei-Li.

“But I’m happy we ended winning,” she said.

“We turned the ball over once too often,” lamented Kazakhstan coach Andrii Miekhovykh.

Kazakhstan turned the ball over 31 times against Taipei’s 21. And more importantly, Taipei converted 23 of the turnovers while Kazakshtan managed only four.