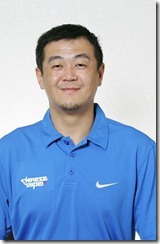 Liu twice led Dacin to advance to the SBL Finals but lost to Yulon and Taiwan Beer respectively. He coached Chunghwa Telecom of the women's league WSBL for two years after leaving Dacin.

According to Yen, Liu will be in charge of development of young players while Chou is in charge of on-court coaching and substitution.

Taiwan Beer will rely on younger players this season as Lin Chih-chieh and Wu Tai-hao will both play in China and Doug Creighton has left the team to sign with Pure Youth.