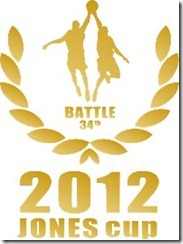 According to Asia-basket.com, the roster of a US team for the Jones Cup has been announced.

With the NBA Legends in town, Taiwan has become a hot bed for USA talent and stars. The NBA Legends will play versus a Taiwan Select team just 3 weeks before the 34thAnnual Williams Jones Cup. But for the first time since 2004 Team USA will participate in the Jones Cup. Featuring 11 players owning Asia Professional Basketball experience, including the 2010AsiaBasket.com All-Arab Club Championships Best Import Player Marcus Melvin and the 2011 Asia-Basket.com All-Japanese BJ League Guard of the Year Wayne Arnold.

CTBA and UPG today announced 13 players for the 2012 USA Men's Select Team that will participate in the 34th William Jones Cup tournament which will be held in TPEC Gym in Tienmu, Taipei from Aug 18-26, 2012 (Live on ESPN). The USA Basketball Men's Select Team will compete against the following national teams (Japan, Philippines, Qatar, Lebanon, S. Korea, Iran, UAE, and Taiwan).

USA Basketball also announced that serving as co-head coaches of the USA Select Team are former NBA player and coach David Benoit and Usbasket.com All-United States Coach of the Year Travis McAvene. Benoit served for three seasons as head coach in the Japan BJ League. McAvene, who was the former assistant coach at Coppin State University, left the NCAA and began coach US leagues for the last 5 seasons. McAvene has become the best in the business winning the respect of the world after receiving USA Coach of the Year voted by Usbasket.com.

'The USA National Team selection process was based on American players with great international experience including Asia. We wanted to focus on these types of players because of the Asian style of basketball,' said Ying-Chou Chou of UPG.

Members of the USA Select Team will assemble in Atlanta, GA and conduct a training session August 5, 2012. All practices will take place at Morris Brown University.