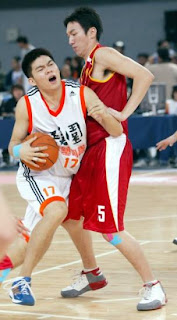 -- Key changes: Daniel Chiang, former owner of the team, claimed he handed the team to Pure Youth Construction Company for nothing in return, although some people were suspicious. In the end of the day, the team changed its name for the third time in three years (Sina, then YMY, then Azio).

As bad as Pure Youth, which was known as Azio Eagles, was last season, it exceeded expectation with seven wins, believe it or not. The team chose to keep Hsu Chin-tse as head coach and should try to build on that "momentum" this year to be the best it can be.

Meanwhile, the team maintained its policy of not hiring any import player to keep its budget down. It has an alternative way of hiring non-local players though.

Mao will a versatile player who can play several positions, including poing guard, small forward and some four. If he improves his perimeter game, Mao will be able to play the off guard as well and makes himself an integral part of the team.

Another important player will be Chien Jia-hong, the primary inside force although he's only 196cm tall. Chien makes up his height disadvantage with hustle and positioning. He should be able to be a consistent double-double contributor.

Wu Jian-long is the same type of player -- an undersized center/forward who works hard in the paint.

Hsu Chin-tse is expected to rely on players he has been familiar with during the days when he coached the Tsaishin High School. Which means Zuo Tsun-kai, Chen Shi-jay and Hong Chi-shan will have a lot of playing time.

Athletic wing Chang Yu-lin is an interesting player to watch. Chang is primairily a slasher who uses his outstanding first step and occassional threes to change the momentum of the game as a X-factor. The problem is his consistency.

Newcomer Chen Jun-jay is a combo guard in the university league. What he can do in this level remains to be seen.

Other than that, most of the players are unproven and will have a hard time finding a spot on the other teams. For Pure Youth, it will not be easy to surpass last season's win total.