Once again, sorry for the late posting. I have been extremely busy in the past month. Anyway, if the China Times story is correct, 6-6 forward Rolan Roberts will become the only import player in the SBL next season.

Dacin Tigers is expected to sign the 30-years-old former Salukis, who played in Turkey, France and Australia, China Times reported, saying that Roberts will be the only import in the league as no other teams plan to hire import players due to limited budget. Roberts is expected to get monthly salary of close to US$ 10,000, the newspaper reported.

At the same time, Jonathan Sanders, who have been in the Taiwanese league for two years, announced in his personal blog that he has decided to retire from basketball at an young age of 27. Sanders said Dacin Tigers has negotiated with him for a contract in the upcoming season but the deal did not go through.

The 6-6 forward was named to All-SBL team twice in two years -- 2006-07 with Videoland Hunters and 2007-08 with Dmedia Numens. In both seasons Sanders posted monster numbers, led his teams to the playoffs and was hot MVP candidates. However, he failed to win the prestigious award both times, which in my views was ridiculous and reflected the injustice among Taiwanese media voters. 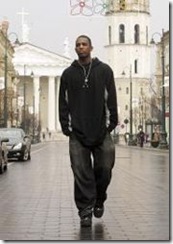 I have repeated many times here about the crazy system the SBL has implemented here. The rule allowed only non-playoff teams to hire imports. The hiring is not mandatory though. Non-playoff teams can decide whether they're interested in signing imports.

The crazy thing here is that import players who play hard for his team and lead his team to the playoffs will lose his job the following season! Sanders is both the perfect example and biggest victim of this crazy system.

That said, I hope the experience does not leave Sanders with a bad taste in his mouth. Hopefully the playing experience in Taiwan will be a memorable one for him. Check out Sanders' blog here at http://jonsanders32.blogspot.com/