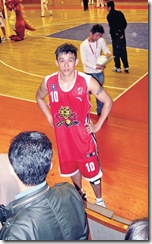 Yang Yu-ming had 10 points, 2 rebounds and 2 assists in his debut with CBA's Jilin Northeast Tigers, a 23-point loss to Shanxi, and made a rare start at point guard in his first game in the Chinese League, China Times reported.

Yang, who played 39 minutes Monday night, is one of three Taiwanese players -- all of them are expected to play as point guards -- playing in China this season. Wang Shin-kai, who played for Yunnan last year, is back with the team again and Sun Hwan-bo plays for the expansion team Shaanxi.

Sun had 2 points and 2 steals in 6 minutes as the third point guard while Wang went scoreless in 17 minutes.

Yang spent last season with Dacin Tigers of Taiwan's Super Basketball League but decided to try his luck in China as the former NT shooter lost his starting role on the team and played mostly as a substitute.