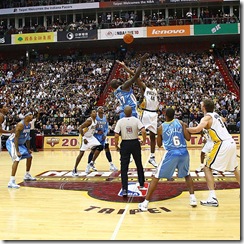 TAIPEI, Taiwan(AP) In the first NBA preseason game played in Taiwan, the Indiana Pacers defeated the Denver Nuggets 126-104 on Thursday.

Troy Murphy, Brandon Rush and Roy Hibbert each scored 20 points for the Pacers, who led throughout the game in front of a sellout crowd of 13,599 at the Taipei Arena.

"We're probably about 35 percent ready for the season,'' Pacers coach Jim O'Brien said. "We executed tonight what we practiced.''

Carmelo Anthony led the Nuggets with 17 points. J.R. Smith added 16 points and Chauncey Billips and Joey Graham each had 14.

"Right now, we're not playing with a good rhythm,'' Nuggets coach George Carl said. "We have to find answers by (the season opener on) Oct. 28.''

The Pacers led by eight points at the end of the first quarter and expanded it to 14 at the half. They led 98-74 heading into the fourth quarter. 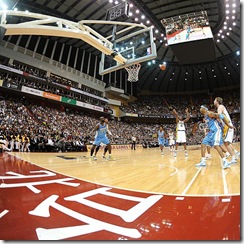 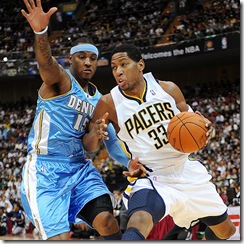