Pacers embark on historic "trip of a lifetime" 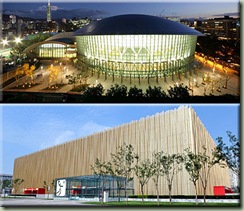 Only two members of the team, T.J. Ford and Brandon Rush, have been to China, none to Taiwan, so the trip the Pacers will embark upon Monday morning offers quite a bit of mystery.

Luther Head, however, found the essence of the journey.

And that, really, is the point of the thing.

The Pacers will travel more than 16,000 miles to two Asian destinations, a seven-day journey sandwiched by 17-hour flights going and coming, to play the first NBA game ever in Taiwan and the fourth in China, both against the Denver Nuggets.

"Personally, I'm very excited for a number of reasons," said Coach Jim O'Brien. "It's a great chance for these guys to spend a lot of time together in a very unique environment.

"It's a trip of a lifetime. These guys will remember this trip for the rest of their lives. Now, my old life, I'm closer to the other end, but this is going to be a lot of fun. I'm very, very excited about the opportunity."

The Pacers face the Nuggets Thursday (at 7:30 a.m. Indianapolis time) in Taipei, then re-board their jet and head for Beijing, where they'll play the Nuggets on Sunday (in Indianapolis, that'll be Saturday at midnight). Both games will be broadcast live by Fox Sports Indiana and re-broadcast at 7 p.m. Thursday and Sunday respectively.

"I've come to the realization that basketball over there is going to be limited with the amount of practice we have," said O'Brien. "The chance to play games will be very, very important. But I'm more focused on the event of traveling over to these two countries. I think that's the key thing.

"At some point in time, you have to just go with the flow and this trip, I asked for like four hours of practice one day and they said, 'You can have two hours and then you have to do a media thing.' So it is what it is."

For O'Brien, going with the flow meant cancelling the 6 a.m. practice he had scheduled for Monday morning. Hey, it was his only open time slot for a couple of days. Because the Pacers cross the international date line on their way to Taiwan, they won't arrive until roughly 4:30 p.m. on Tuesday.

"I'm looking forward to this trip," said Troy Murphy. "It's going to be really cool. I've never been anywhere near there. I never thought in my life I'd be able to go over there and play in an NBA game. It's really an honor and I'm excited to be a part of it."

Murphy, however, has this issue with bumpy flights.

"I'm not a great turbulence person," he said. "I'm an OK flier. I'll sit on a plane all day if it's smooth. But if it's a 10-minute flight and it's bouncing around, I'm ready to strangle somebody."

The Pacers have practices on Wednesday and Saturday and morning shootarounds on game days. Other than that, their schedule will be packed with a variety of events including:

# A trip to the Great Wall and tours of the Temple of Heaven, Tiananmen Square, The Forbidden City and the Pearl and Silk Markets in Beijing;

"We've got pretty much a packed schedule," said Ford, who accompanied Dwight Howard to Beijing to attend the adidas Superstar Camp in 2006 . "I've been to the Great Wall so I'll be able to give some of those guys the experience. If we have time, I'll show the guys as much as I possibly can.

"I have a big following over there. Their culture is great, I love their culture, they love basketball and they're definitely going to make everyone feel like a superstar."

Dahntay Jones has traveled extensively but this will mark his first trips to Taiwan and China. It's a circuitous route for something of a reunion with friends from his Denver days.

"I definitely can't wait to see some of my old teammates. Those guys are great," he said. "We get a chance to compete and enjoy Taiwan and China, so you can't lose on this trip."