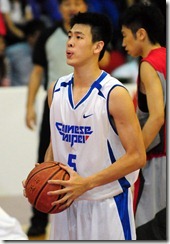 Sung Yu-hsuan scored 31 points on 14-of-19 shooting but that was not enough to bring Taiwan a win as the host lost 77-72 to China's Tianjin Polytechnic University on the second day of the 2010 Asian University Basketball Championship.

All but Korea, China and Lebanon among the seven participating teams sent All-Star teams to Taiwan, so I argue that this is not a tournament for you to evaluate the real basketball strength of Asian countries at the university level. Plus, it is actually an invitational competition.

Hong Kong is surprisingly leading Group A with two wins while South Korea's Myongji University, which won the tourney back in 2006, is now 0-2 in Group B.