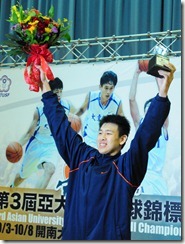 However, the inspiring win was somewhat overshadowed by none other than the political row between Taiwan and China. China's Tianjin Polytechnic University withdrew from the game vs. Mongolia after seeing hundreds of Taiwanese national flags displayed in and around the parking lots outside the arena.

Chinese basketball team pulls out of tourney over Taiwanese flags

Taipei, Oct. 8 (CNA) A visiting Chinese university basketball team withdrew Friday from a tournament being playing in Taoyuan County after seeing hundreds of Taiwanese national flags displayed outside the arena.

After arriving Friday afternoon at Kainan University Arena, where the 2010 Asian University Basketball Championship was being held, the bus carrying the Tianjin Polytechnic University basketball team turned around and left.

The team missed its game against a Mongolian All-Star team, and was officially credited with a 20-0 loss.

Though nobody from the Chinese delegation commented on its pull-out, the team may have been angered by the hundreds of Taiwan national flags displayed in and around the parking lot and along the road leading to the arena that greeted their bus.

They were put there by a "national flag rally" organized by two local university students in protest of a move the night before by an official from the tournament's organizer, the Chinese Taipei University Sports Federation (CTUSF) , to stop a fan from displaying the country's national flag in the stands.

The students were incensed by reports that the CTUSF official, Lee Hung-chi, clamped down on the fan at China's insistence, though subsequent reports indicated Lee acted of his own volition.

"This is a silent protest to the Chinese team that made the flag issue a big deal, " said one of the two student protest organizers identified only by his surname Hsieh.

The other organizer, surnamed Hsu, said the protest was "non-political" and was held to express "freedom of speech."

Lee described the Chinese team's withdrawal as "silly, " but he himself was criticized by the Sports Affairs Council (SAC), Taiwan's top sports administrator, for going after the fan.

In a statement released Friday, the SAC called Lee's move inappropriate and said he had misinterpreted the "Chinese Taipei" formula, devised in 1981 by the International Olympic Committee to enable Taiwan to participate in the Olympics after the People's Republic of China was admitted to the Olympic movement.

Under the convention, Taiwan participates in international competitions under the name "Chinese Taipei, " and uses an Olympic flag that differs from its national flag.

Organizers of competitions in Taiwan are not allowed to fly the country's national flag at competition venues, but the convention does not regulate spectators and what happens in the stands unless organizers announce specific restrictions prior to a competition.

Ming Soo Jeong had 31 points, 14 rebounds and 5 assists to power Myongji University of South Korea to a 75-67 win over Hong Kong to win the fifth place in the seven-team tourney.