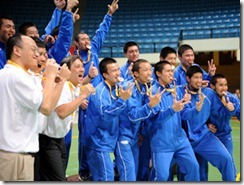 Taiwan won its first medal in the FIBA Asia U18 Championship for Men since 2000 and a berth to represent Asia in the 2011 FIBA U19 World Championship after edging Iran 65-60 in the bronze medal game in Sanaa, Yemen late Friday Taiwan time.

Hung Kang-chiao scored a team-high 18 points and Hu Lung-mao added 17 points as Taiwan used a 14-5 run in the third quarter to control the momentum before holding off Iran's furious rally in the final period.

Taiwan, which opened the biennial tournament with an overtime loss to the defending champion Iran, limited the Iranians to a miserable 30 percent field goal shooting percentage in the game for a sweet revenge.

"We have improved a lot, haven't we? " Taiwan head coach Huang Wan-lung quipped after the game, according to the post-game report on the FIBA Asia Web site.

Taiwan last won a medal -- also a bronze -- in the biennial tourney in Kuala Lumpur in 2000, when Huang served on the Taiwanese junior national team as an assistant coach under South Korean head coach Chung Kwang Suk.

With the win, Taiwan secured one of three Asian berths in the 2011 FIBA U19 World Championship, which will be held in Latvia from June 30 to July 10, 2011. Taiwan's previous appearance in the world's top-level junior competition came 23 years ago, when they played at Bormio, Italy in 1987.

China routed South Korea 103-80 in the title game to win its ninth gold in the history of the tournament. The gold and silver medalists will also play in Latvia. 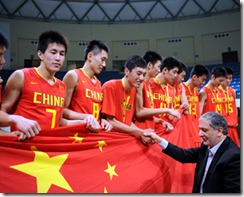