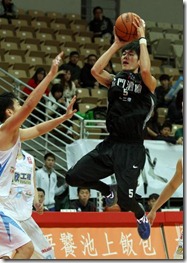 Liu's performance was highlighted by a 23-point, 12-rebound effort in a win over Dacin.

He had 31 points in the media voting over Quincy Davis of PY, who had 18 points, and TB forward Cheng Jen-wei's 12 points.

KKL head coach Hsu Chih-chao gave Liu credit for his scoring ability and improvement on rebounding, saying that Liu could perhaps play in the Taiwanese national team in the future.

In related news, the Chinese Taipei Basketball Association (CTBA) decided to postpone the decision on the controversy surrounding import heights to the next season.

Despite several teams have file complaints over the height of Taiwan Beer import Kibwe Trim, who was listed by TB as 6-7 but appeared to be taller than 6-9, the CTBA said it did not make sense to resolve the issue at the moment with less than two months remaining before the end of the regular season.

Yulon Luxgen, one of the teams that filed the complaints, said it would not pursue the issue, but hoped that the CTBA would establish a fair mechanism to determine heights.

CTBA President Ting Shou-chung said he does not rule out eliminating the height restriction of import players next season.