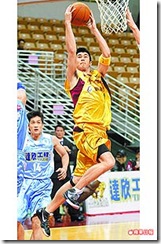 Doug Creighton was selected by Bank of Taiwan Wednesday as the No. 1 pick in the 2009 SBL Local Draft.

Wait. You ask, "Hasn't Creighton played in the SBL for two years?"

Yes, you're right. He played for Pure Youth and Bank of Taiwan in the past two years.

But you're also wrong, because he played as a foreigner during those years and this will be the first year he plays as a local after obtaining a Taiwanese I.D.

As crazy as it may seem, Doug Creighton was handed a BOT jersey from BOT head coach Lai Liang-chung, the man he played for last season, in the draft ceremony. Check the photo here. 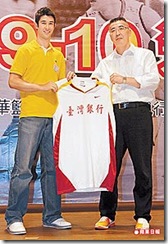 KKL added point guard Hsu Bing-yen in the second round.

The draft is pretty much meaningless because most of the players picked up would not be able to play right away. According to the agreement between the SBL and the UBA (University Basketball Association), college players are not allowed to play in the SBL before their junior year.

Which means, if you select a high school graduate in the draft, he would not be playing for you in two years.

The SBL tried to pattern the draft after the NBA draft or most drafts you see elsewhere, but some teams never take the draft seriously. Yulon Luxgen, which has the largest budget among seven SBL teams, added promising prospect Lin Chieh-min to its roster prior to last season without going through the local draft.

Funny thing is that nobody said a word about it! And the SBL Committee never do anything about it. No fines and penalty. No condemnation. No statement. Everyone acted like it has never happened.

It's not surprising to see that the draft which had a good intention at the first place has become a joke.