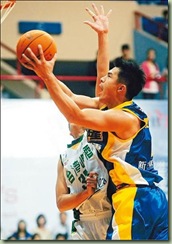 Several local media reported that at least three players, including Yulon Luxgen star forward Chen Hsin-an, will sign with Chinese teams and play in China next season and a news wave of Taiwanese players exodus to China looked inevitable.

According to the reports, Taiwan Beer point guard Hsu Hao-cheng and former Kinmen Kaoliang Liquor (KKL) guard Lin Kwan-lun, who was released in the summer, will sign with Shanxi, one of 18 teams in Chinese pro league CBA (Chinese Basketball Association).

It was also reported that Chen Hsin-an, one of the best players in Taiwan, will sign with Guangdong for an annual salary of NT$11M (US$340,000) which is 7.6 times of his current salary with Yulon.

Taiwan Beer forward Lin Chih-chieh was the first Taiwanese player to sign with Chinese club this year, inking a one-year contract with Zhejiang in September which will earn him around US$15,000 per month plus incentives.

However, Central News Agency reported that Chen has not signed with any team although he expressed his wish to play in China for better salary.

Chen was quoted as saying that it was true that he has been in contact with three CBA teams, but stories about the NT$11M salary were incorrect.

The 29-years-old forward still has two years left in his contract with Yulon. The interesting thing was that Yulon' general manager Chiang Yu-cheng told a press conference that the team will grant Chen his letter of clearance which allows him to transfer his registration to Chinese basketball authority.

These are not all. Taiwan Beer head coach Yen Chia-hwa was quoted by the media saying that TB center Wu Tai-hao has been courted by as many as six CBA teams with lucrative offers. Yen would not let of Wu, however, stressing that Wu is an irreplaceable piece in TB's quest for the SBL title.

Rumor said Yulon lead guard Lee Hsueh-lin is entertaining the idea of playing in China for better pay, too.

All these rumors make you wonder what will the 2009-2010 SBL season look like when it tips off next January. Will half of Taiwan NT players play in the opposite side of the Taiwan Strait?

On the other hand, I guess we can't blame the players for dumping the SBL for greener pasture when the league they try to leave behind is one which is still without a TV contract and not knowing whether it should allow foreign players or not with one month before its season opener.