Apple Daily reported that Yulon Luxgen forward Chen Hsin-an is scheduled to go to China next Sunday and is expected to sign with Dongguan New Century.

Chen, who had surgeries on both knees in June, is working on his conditioning to prepare for the upcoming season in China, which will tip off on Dec. 19.

Once the biggest star in Taiwanese basketball, Chen has been plagued by injuries during the past three years and his skill deteriorated.

With or without Chen, Yulon has been and will always be competitive with the core of center Tseng Wen-ting and a group of aggressive and experienced guards. Which was why Yulon let go of Chen.

Sources told me that Yulon planned to send Chen to Shanxi but Chen opposed the move. Luxgen head coach Zhang Xue-lei, sources said, made up his mind that Yulon would stay competitive without Chen. At the same time he can be a valuable asset for his good friend Wu Qing-long, Shanxi's head coach.

Feeling unwanted, Chen then made his move to contact Chinese teams although he's still under contract. He figured that Yulon would let him do whatever he wanted again, just like what happened in 2002 when he tried out for Sacramento Kings and 2005, when he signed a lucrative contract with ETSN Antelopes before changing mind and re-joining Yulon.

Guess what? Chen was right. Not only Yulon approved his transfer to China but Yulon decided not to challenge Chen's breach of contract. 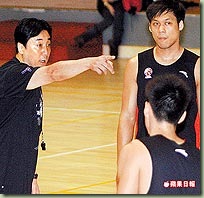 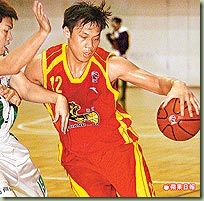 On other news, Lin Chih-chieh, who's currently in Zhejiang's pre-season training camp, said that his goal for the new season is averaging 10-15 points and 5 assists.

But Lin will have to make a major adjustment in his game, which contains a lot of penetration. Zhejiang head coach Wang Fei, a former Chinese NT member, stresses a lot on set-up plays which require less penetration, more ball movement, cutting and screening.