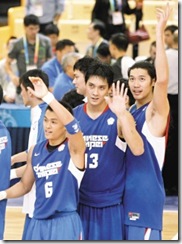 Tseng Wen-ting missed a pair of free-throws with 10 seconds to go as Taiwan NT was one step short of a huge comeback bid in the final two minutes, losing a 98-97 heartbreaker to South Korea in the 2009 East Asian Games final and failed to defend its title.

Taiwan NT, who led by as many as 10 points in the third quarter over a South Korean team consisting of military and college players, suddenly found themselves trailed by 12 with two minutes remaining.

Koreans closed the gap with an 8-0 run early in the final quarter.

Taiwan head coach Chung Kwang-suk opted to go for the late game intentional fouling and it worked like magic. As Koreans kept missing free-throws, Taiwan cut the deficit to two with 10 seconds to go.

Lee Hsueh-lin and Tseng Wen-ting executed a perfect give-and-go on the last play as Tseng was fouled on his way to the basket. But he missed the most crucial free-throws in the game.

South Korea made the ensuing free-throws to lead by four before Yang Che-yi added a three-pointer with 0.3 seconds left in the game. There was not enough time for Taiwan to turn the tide.

Tseng Wen-ting had a team-high 23 points and 10 rebounds but was only 4-of-11 from the free-throw line. Chang Chih-feng had 20 points and Lin Chih-chieh added 19.