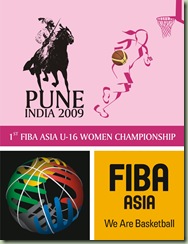 Taipei played superbly coordinated basketball in the final three minutes of the game, outscoring their rivals 7-3 in this period, and eked out a 66-63 win over Korea to clinch the bronze medal.

Down 57-58 with about three minutes left in the game of swinging fortunes, Taipei ran a 7-0 spree.

Eunji Kim sank a three-pointer and Dajeong Park converted both her free-throws to bring the score close to 63-64.

But with less than four seconds left, and Taipei holding the ball, Korea could only muster a foul.

Lin Yu-ting, who scored as many points as Dajeong Park to lead Taipei’s scoring, made no mistake on both the occasions, and her team had won a well-fought and well-deserved bronze.

Fortunes in the game, had throughout swung like the proverbial pendulum with neither side able to sustain any sizable lead.

Taipei seemed to gain an edge when they ran a 9-0 run across the first quarter break and then a mini 6-0 run for a 28-19 lead midway through the second quarter.

Korea hit back in kind with an 11-0 run that took them past Taipei and helped them close the first half 39-35.

Again, a lead that proved as momentary as the margin.