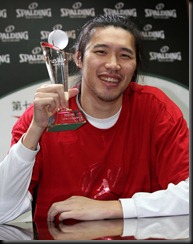 Tseng Wen-ting was named the Most Valuable player of Taiwan's Super Basketball League (SBL) for the months of February and March, the league announced Thursday.

A media poll awarded the honor to Tseng, a 204-centimeter center, after he led the Yulon Luxgens to a 10-game winning streak in March as they regained momentum after the Lunar New Year break. Tseng averaged 13.1 points, 9.1 rebounds, 1.93 steals and 2.3 blocked shots during the month.

"It's a big surprise. I guess I got this award because we did pretty well after the New Year break," the 26-year-old said. 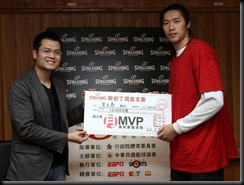 Yulon, a perennial powerhouse in Taiwanese basketball that has won three SBL titles in the league's seven-year history, suffered the first four-game losing streak in team history around the New Year vacation. But now they have a record of 17 wins and five losses, one game behind the league-leading Dacin Tigers.

The season has been especially difficult for Tseng because Yulon is the only team in the seven-team league that did not hire foreign players after the SBL decided for the first time this year to allow all of its teams to hire imports to improve the level of competition.

The decision left Tseng the undesirable task of having to defend against taller and stronger foreign players. Injuries to both of his knees made the challenge even more difficult, but Tseng played through and didn't complain about not getting enough support from the bench players.

"It's not a surprise at all for me because when you look at him (Tseng), you can't just look at the numbers. He has been contributing to the team in a lot of ways and he always plays his heart out and gives 100 percent on the court, " said Yulon head coach Zhang Xu-lei, a naturalized Taiwan citizen who formerly played for the Chinese national team.

Tseng, a Taiwan national team regular, said his goal for the season would first be making the post-season and then hopefully returning to the championship series in June.