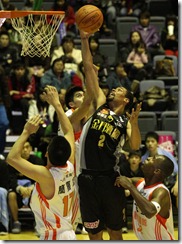 Correction: The Week 11 MVP should be Tien Lei rather than Jon Sanders. Sanders was the Week 12 MVP. My bad...

KKL import Shawn Hawkins was named Week 13 MVP after averaging 29.7 points and 11.7 rebounds for the week and a season-high 42 points outburst.

Hawkins currently leads the league in scoring with 25.5 points per game to go with 11.1 rebounds.