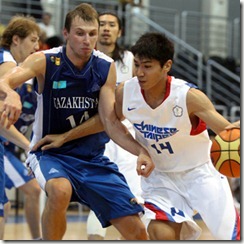 Taiwan lost to Jordan 85-70 but managed to beat Kazakhstan 73-67 in its last game of the 2010 FIBA Asia Stankovic tournament, finishing with a disappointing 7th place in Zhang Xuelei's first international competition as Taiwan NT head coach.

Zhang took over Taiwan NT this year and led the team to finish 5th in a 7-team Jones Cup tournament in July in his debut.

To be fair, Zhang’s scorecard is incomplete because several key players, such as Wu Tai-hao, Tien Lei, Lin Chih-chieh, have been absent since Zhang took over to rest their injuries. Chen Hsin-an was not on the national team this year because he did not play in Taiwan at all this past season.

However, things are not looking good for Taiwan NT, which has been dominated by opponents in Beirut in the paint time and time again. Taiwan’s set play and defense has been questionable under Zhang.

It’s unfortunate that Taiwan chose not to retain Korean coach Chung Kwon-suk, who led Taiwan to the 5th place in the latest Asian Championship. Chung’s stress on defense and his no-nonsense approach had helped the team grow a lot during his tenure. And Taiwanese young coaches has learned a lot from him as his assistants.

Barring player injuries, Zhang needs to quickly transform the team in a short time for the next Asian Championship.

Taiwan clinched the 7th spot at the 3rd FIBA Asia Stankovic Cup. In their last game the team overcame Kazakhstan 73:67 as the latter finished 8th.

Kazakhstan started more confident and enjoyed 17:8 in the opening tip. They increased to 21:12 after the first 10 minutes but could not keep the lead for good. Kazakhstan continued their push and had 30:19 after 15 minutes. Taiwan reduced the gap at the halftime as the board showed 39:33. The third period was decisive as Taiwan took 44:42 after the first 5 minutes in the third quarter. They kept 49:47 at the end of thirty minutes. Kazakhstan made the last spurt in the first minutes of the last period and had 58:57, but lost the game. Taiwan however won the rest of the quarter and celebrated the last win in Lebanon.

TPE/KAZ - Taipei rally to down Kazakhstan for seventh place
BEIRUT, Lebanon (3rd FIBA Asia Stankovic Cup): Chinese Taipei outscored Kazakhstan 14-9 in the last five minutes of the first half, and capped their rally with a 73-67 win to take the seventh position on Sunday.

Lu Cheng-ju (white jersey in the picture above) scored nine of his 13 points for the game during the second quarter to lead the Taipei resurgence.

Hung Chih-shian accounted for eight of his team-high 17 in the second quarter.

In contrast, 14 of Dmitriy Gavrilov’s (blue jersey in the picture above) game-high 18 points came in the first half.

“It’s good to round off our campaign with a win,” said Taipei coach Zhang Xueli.

“The competition has been tough and deep. Therefore any win here is hard earned, especially for our team which is rebuilding,” he added.

Kazakshtan coach Vadim Burakov sounded almost similar: “Each game played has been a learning experience. I’ll take anything that comes.”

“I think we played a tough game, and kept ourselves in the race till the end. We can only grow from here,” he said.