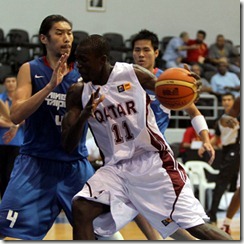 Taiwan's hope of making the semifinal in the 2010 FIBA Asia Stankovic Cup was eliminated after a 86-78 loss to Qatar in a quarterfinal game Friday.

21 years-old 6-6 forward Targuy Alban Ngombo, who was reportedly a naturalized Qatari from Congo, punished Taiwan's thin frontline with 33 points and 10 rebounds. Ngombo led Qatar to surge ahead after the opening period and led by as many as 13.

E.A. Saeed had 17 points for Qatar, a team of veterans and some new faces.

Taiwan, which was outrebounded 50-27, managed to lead by 24-22 at the end of the first period, but everything went downhill after that.

In the semifinal, Qatar will meet Japan and Lebanon hosts the Philippines.

Japan’s victory means it has secured one more seat for East Asian countries in the next Asian Championship. In the 5-8 placing games, Taiwan will meet Jordan and Iran will meet Kazakhstan before the winners play for the 5th place.

The 5th place finish is crucial since top five teams in the tournament will win seats for each subzone in the next Asian Championship. If Taiwan is able to squeeze in the top five, it is almost certain that Taiwan will qualify for the next Asian Championship because there will be four seeds in the East Asia subzone, including two that were already granted and two won by Japan and Taiwan.

BEIRUT, Lebanon (3rd FIBA Asia Stankovic Cup): GCC champions Qatar took charge of the proceedings early in the second quarter and then powered on past Chinese Taipei for a 86-78 win on Friday to take their place in the semifinals.

Coach Ali Fakhroo thus avenged the 79-87 defeat Qatar had suffered at the hands of Taipei in the fifth place play-off at the 25th FIBA Asia Championship in Tianjin last year, the last time the two had met in an official competition.

“This is an entirely different team. We are on a rebuilding process. And the boys are determined to prove their worth in every game,” Fakhroo said.

Both played hide and seek with the scoreboard for the better part of the first 15 minutes, during which Qatari spearhead Targuy Ngombo was rather subdued.

The 21-yearold, undoubtedly the find of the tournament for FIBA Asia in terms of scoring prolificacy, scored only five points during his entire stay of 10 minutes in the first quarter, but came into his own early in the second.

A characteristic drive-in followed by the draw of foul from the perimeter and the subsequent success with all the three free-throws announced Ngombo’s find of his sublime touch and there was no further trouble for Qatar.

A conversion of an offensive rebound furthered his team’s cause and when he took the assist from Ali Ali to logical – and successful – conclusion, Qatar were truly in control.

The team had to maintain the form thereafter, which they did with consummate ease.

“We are playing but far from our best,” said Fakhroo.

“There are yet chinks to be ironed out in offense as well as defense. More in defense. But I think we are getting better,” he added.

Ngombo eventually finished with a game-high 33 points – 11 of them coming in the crucial second quarter. He also pulled down 10 rebounds.

Erfan Saeed with 17 points and Daoud Musa continued their longstanding service for the National team with another impressive showing – the former collecting nine rebounds to go with his 17 points and the latter adding value to his 14 points with six boards and a game-high four assists.