Subpar performance for Taiwan so far in Guangzhou Asiad 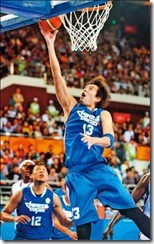 It's almost certain that Taiwan will meet Group A leader, either China or South Korea, in the Nov. 24 semifinal match with a runner-up finish in Group B behind Japan, which will meet A2 in the semis.

Meanwhile, Taiwan men's NT lost 72-70 to Qatar Friday and is now tied 1-2 with the Philippines in Group E. Looks like Taiwan and the Philippines will have to fight for the last quarterfinal seed in the group.

Lu Cheng-ju was 5 of 7 from three and scored 23 points to pace Taiwan, which also received 18 points from Tien Lei and 11 from Lin Chih-chieh.

Lu made two threes in the third period to cut the deficit to one and scored 11 to help Taiwan close in the gap again in the final quarter. Trailing 69-68, Tien Lei was stripped of the ball on his baseline drive as Taiwan failed to score on its last possession.

Without center Tseng Wen-ting, Taiwan was pounded on the boards, outrebounded 44-29 by Qatar.

Targuay Alban Ngombo led Qatar with 23 points and 11 rebounds while veteran Yaseen Musa had 15 and 12.

The quarterfinal round will use a knock-out format with F4 meets E1, for example.