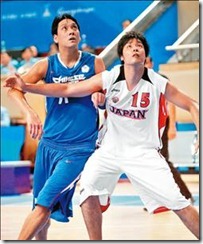 Taiwan had an easy 93-66 win over India after losing to Japan 63-57 in the opener to split its first two games of the 2010 Asian Games men's basketball competition in Guangzhou, China.

On Wednesday, Lin Chih-chieh had 23 points and Tien added 20 in the rout. Yang Ching-min scored 13 pooints and point guard Lee Hsueh-lin dished out 10 assists to go with five points.

Taiwan was not so fortunate the previous night, when it committed 15 turnovers against Japan, which took advantage of Taiwan's carelessness for 14 fastbreak points. Japan also dominated the paint, scoring 44 points in the restricted area against Taiwan's 24.

Taiwan managed to pull within 24-23 at the half after a dismal first quarter, during which it only scored seven points. However, the team could not match up against the more prepared Japanese inside, especially after losing starting center Tseng Wen-ting, who didn't go to Guangzhou with the team due to injury.

Ryota Sakurai scored nine of his 12 points in the crucial fourth quarter to lift Japan for the victory. Joji Takeuchi paced the team with 15 points and 13 rebounds while his twin brother Kosuke Takeuchi also had a double-double of 13 points and 10 boards.

Yuta Tabuse had 10 points for the winner.

Taiwan has to finish in the top four of the six-team Group F to advance to the knockout quarterfinal round. After the loss to Japan, it needs to beat at least one team among Qatar, Iran and the Philippines to ensure the knockout round berth.

Asian Games standings as of Nov. 17