Taiwan Beer beat Dacin Tigers 83-78 in overtime in Game 5 of the 2011 SBL Finals Friday night to win its third title in team history and its first title in three years.
Taiwan Beer, which won the best-of-seven series 4-1, won its first title after completing a back-to-back title run in 2007-2008 with its head coach Yen Chia-hua becoming the first SBL coach winning three titles.

Swingman Yang Ching-min, who scored seven of his game-high 23 points in the final quarter to take the game into the extra period and made four crucial free-throws to ice the victory, was named Finals MVP.
The five-game series was the most competitive Finals in the SBL's eight year history as the final margins in all five games were less than five points with two of them going into overtime.
Results:
Game 1: TB 62-59 Dacin
Game 2: TB 80-75 Dacin
Game 3: TB 94-89 Dacin
Game 4: Dacin 76-73 TB
Game 5: TB 62-59 Dacin
Yang, Wu leaving?

However, all is not that well for the champion. Yang and TB's starting center Wu Tai-hao are reportedly going to China next season. Yang said he is still weighing on his decision, but Wu told media that he will be definitely leaving.
If Yang and Wu both leave, it means that TB will lose three-fifth of its starting lineup in two years -- after Lin Chih-chieh's departure to China (Zhejiang) last year.
The next NT coach 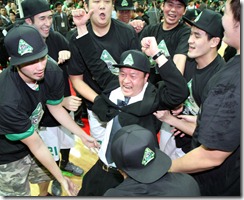 Former CTBA President Mao Kao-wen, who has resigned from his post due to illness, has made clear that the new head coach of Taiwan national team will be head coach of the SBL champion.
In other words, Mao doesn't want to hire a foreign coach, such as South Korean Chung Kwang-suk who led Taiwan to fifth place -- its best finish in the tournament since 1999 -- in the 2009 FIBA Asia men's basketball championship, to coach the national team.
Which means… Yen will be automatically qualified as the new Taiwan NT head coach? Not exactly.
The CTBA has required in the past that only coaches who have been certified as grade-A coaches are qualified as candidates. However, Yen is not one of them.
Local basketball observers have had mixed reviews about Yen, who did not develop as a basketball coach the traditional way because he had no previous coaching experience before coaching a team in the amateur league and later Taiwan Beer in the SBL.
Yen functioned as more of a general manager than a head coach, in my opinion, since he relinquished much of the substitution and on-court coaching decision to his assistant Chou Jun-san.
I'm not sure how this issue can be solved. Let's wait and see.