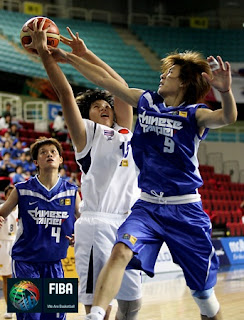 Taiwan women's NT routed Thailand 114-64 Thursday to stop its three-game losing streak in the Asian Championship for Women and concluded the preliminary round with 2 wins and 3 losses. Taiwan advanced to the crossover semifinal as the No. 4 seed and will meet top seed South Korea Saturday.

In the easy win over Thailand, Wen Chi and Lin Huei-mei each scored 23 points for Taiwan. Liu Chun-yi had 21 while Chiang Feng-chun had 12 points and 6 rebounds.

China will meet Japan in the other semifinal matchup. Winners of the semifinals will meet Sunday in the championship game. Highest-ranking team in the tournament other than China, which has a guarnateed seat as host, will win the lone seat for Asia in the 2008 Beijing Olympics.
Labels: asian championship, women's nt
Newer Post Older Post Home