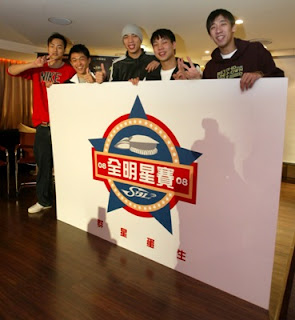 Starters of the 2008 SBL All-Star Game, which will be held in Taipei Arena on Feb. 23, have been decided by online fan voting Feb. 10. Taiwan Beer forward Lin Chih-jay led all votegetters with 60240 votes while his teammate Wu Dai-hao not far behind, receiving 59970 votes.

Top two votegetters at the forward and guard positions and the top votegetter at the center position will be the starting five for Team Red and Team White in the annual festivity. The remaining seven substitutes on each team will be named by Yulon head aoach Lee Yun-kwang, who will lead Team Red, and TB head coach Yen Jia-hua who will coach Team White.

According to the voting results, Team Red starters will be Chen Hsin-an and Tien Lei at forward, Tsun Wen-din at center, and Lee Hsueh-lin and Su Yi-chieh at guard. Tien could sit out the game due to injury. If Chou Shih-yuan is added to the starting lineup, that will be four Yulon players in five starters.

Anyway, that is not supposed to surprise anyone, huh?

And think about it. Chou Jun-san, who acted as an assistant all season although he was listed as a player as well, still garnered more than 6000 votes. Which tells you that this is a fan thing. It's too bad that dmedia's Jon Sanders and Ouyang Jin-hen have to be subs.