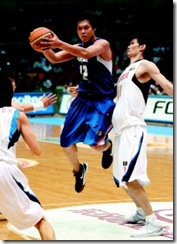 Taiwan Beer marketing director Chen Chien-chou is reported to be the middle man between Lin and at least three CBA teams, including Shanghai Sharks.

Lin, who is coming off a successful showing in the Asian Championship in Tianjin, was quoted as saying that he viewed playing in China as a challenge that could make him a better players by better competition.

"I thought about playing in China years ago. After leading Taiwan Beer to two SBL champions and winning SBL Finals MVP both times, it is time to go because I feel like there's nothing left for me to prove in the SBL, " Lin said.

"I want to prove what I'm capable of doing on the basketball court, " he added.

TB head coach Yen Chia-hwa supported Lin's idea, saying that he will do whatever it takes to remove the roadblock on Lin's road to China.

Fearing that the potential exodus of top Taiwanese players will hollow out the domestic league, CTBA announced a "24-man protection list" last June after a circulating rumor saying that Chen Hsin-an would leave Taiwan and play in the CBA for a one-year contract that worth NT$6 million.

"If Lin wants to play in China, he has to receive the letter of clearance from the CTBA first before he can register with the CBA. That is the FIBA regulation, " said Wang Jen-shen, CTBA deputy secretary-general.

There are verbal and written commitment between the CTBA and the Chinese basketball authority in hopes of keeping Taiwanese players in Taiwan and preventing Chinese teams from luring too many Taiwanese players away, Wang said.

"We would like to see our boys play in the domestic league, of course, " he said.