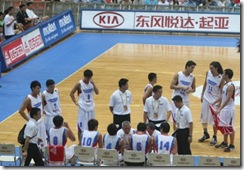 TIANJIN (FIBA Asia Championship) - Chinese Taipei did rather well in the early phases of their quarterfinal game against hosts China on Friday.

The wild card entrants even managed to take a five-point lead in the closing minutes of the first half. But that only piqued the Chinese. 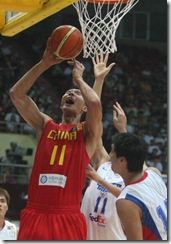 For, the hosts unleashed a scorching 15-2 run from that point to close the second quarter comfortably ahead and continued relentlessly till they finished with a 101-83 win.

The win put former champions China in the semifinals, after finishing 10th at the Tokushima FIBA Asia Championship two years ago.

China seemed to hold the edge in scoring going into the second quarter.

But Tien Lie sprang a surprise on the Chinese, scoring 13 points of his team-high 17 for the game, as Taipei caught their rivals off guard.

But this was to be no David slaying Goliath story.

China who had looked complacent defensively till then, even during the time when they led, pulled up their socks to almost shut Taipei completely out after that.

Rebounds, especially those in defence, played a crucial role in China’s resurgence.

The hosts who had 13 defensive rebounds in the first half, out of a total 20, almost doubled it in the third quarter collecting 22 defensive boards in a total of 32 collections. 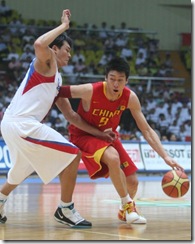 Yi Jianlian and Wang Zhizhi led the scoring for China with 25 points each, with the former returning a double-double.

Wang, the first Chinese player to enter the NBA ranks, had eight boards.

Tien drew a blank in the second half and Chang Tsung-Hsien, who scored 12 of his 14 points for the game ploughed a lone furrow for Taipei.