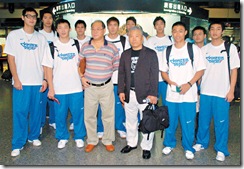 Led by Korean head coach Chung Kwang-suk and resurgent star forward Tien Lei, Taiwan NT left for Tianjin Tuesday with one thing in mind: a better finish than the 6th place they had two years ago in the Asian Championship.

Awaiting Taiwan in the opening game will be no other than the defending champion Iran, which is in the same preliminary group with Taiwan, Kuwait and Uzbekistan.

One of the challenges will be the new competition format, which presents a single round-robin second round that would eliminate four of the 12 teams before the knockout quarterfinal round.

In the second round, each team will play the three new teams in its own group (the final scores of all games played in the Preliminary Round are valid for this round.

Taiwan should have no problem passing the first round. The second round will be a critical stage, however.

Barring a major upset, Taiwan will be in the same second round group with Japan, Korea and the Philippines -- along with Iran and either Uzbekistan or Kuwait.

To make it to the quarterfinal, Taiwan has to beat at least one team among Japan, Korea and the Philippines. It will not be an easy task. 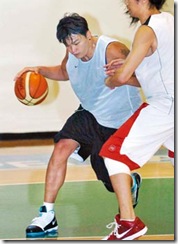 Chung Kwang-suk has made it clear that Taiwan will try to take down either Japan or the Philippines. However, it will be a totally different scenario in Tianjin, China.

The first goal will be making the quarterfinal, Chung said. He added that the second goal would be a better finish than what they did two years ago (6th place).

There are good news though. Taiwan is still without top gun Chen Hsin-an, who has been plagued by his knee injury in recent years. But Tien Lei looks like his old self again after sitting out a full year to nurse the stress fracture in his legs.

"One thing is sure. We're a lot healthier and more prepared than two years ago, " said team captain Yang Che-yi, who at 31 years-old is the oldest player on the team.

Replacing Chen Hsin-an's firepower will be SBL MVP Chang Chih-feng, who played well in the Jones Cup, head coach Chung Kwang-suk said. Chang has been recognized as one of the most hard-working players in Taiwan. It's probably his turn to shine on the big stage.

The key to the tournament will be rebounding and defense, Chung said. In other words, 204cm centers Tseng Wen-ting and Wu Tai-hao will once again play important roles. They have to be aggressive on both ends of the floor to make sure Taiwan would not rely on perimeter shooting too much.

In the mean time, they also have to play smart and avoid foul trouble so they can contribute on the court. A resurgent Tien Lei will be a big help if he can help out on defense and rebound.

The Taiwan Beer tandem of Lin Chih-chieh and Yang Chin-min have a lot to prove. Both of them can score big in SBL games and are among the most popular basketball players in Taiwan. But they have yet to prove themselves in international competitions. Taiwan NT will need their timely baskets and defense on the wing.