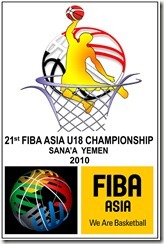 Taiwan routed Malaysia 96-47 for its first win in the 2010 FIBA Asia U18 Championship for Men Thursday in Sanaa, Yemen.

Rebounding from a loss in overtime against defending champion Iran the previous day, Taiwan locked down Malaysia with a strong defense, limiting opponents' field goals to 28 percent and jumping out in front with a 39-18 halftime lead.

"I am pleased about the way we played defense throughout, " said Taiwan head coach Huang Wan-lung after the match.

Eleven Taiwanese players played in the lopsided game as Huang tried to gave his bench more playing time, saying that he felt the team lost to Iran "because the bench lacked experience."

Chien Wei-ju scored a team high of 20 points, while Hu Lung-mao added 16 points, bringing Taiwan to one win and one loss in Group A of the competition.

Sixteen participating teams in the biennial tournament are pooled in groups of four in the preliminary round. The top three teams in each of the four groups will advance to the second round, where they will be divided into groups of six teams each.