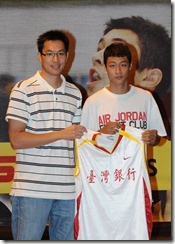 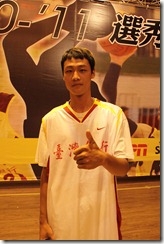 Nineteen-year-old forward Sang Yi-ching was in the limelight again Wednesday when he was selected by Bank of Taiwan as the No. 1 pick in the annual draft for Taiwan's top basketball league, 18 months after winning Most Valuable Player as a high school senior.

"Today is an important day in my basketball career, but I know I have a lot to learn," Sang told the media after the 2010 Draft of the Super Basketball League (SBL), Taiwan's seven-team semi-professional league.

Sang, who led Song-shan High School to win the 2009 Taiwan men's high school championships and is currently a sophomore at National Taiwan Normal University, was joined by 10 others out of 23 total applicants who heard their names called by team representatives. 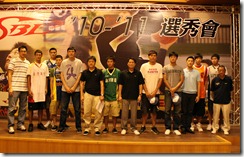 According to league regulations, university students must choose between playing exclusively in the university league or the SBL, which means Sang will not be able to play for Bank of Taiwan -- which finished last season ranked at the bottom -- before 2013 if he stays in school.

He said, however, that practicing with professional players will be a valuable experience and help him make the transition from center to small forward.

"I grew another two centimeters after high school, but I'm still too small to play as a center at the professional level, " said Sang, who is 1.95-meters tall and listed Lebron James, who plays for the Miami Heat in the U.S. National Basketball Association, as his favorite player.

Sang said he was very surprised about his No. 1 selection, which was expected to go to Taiwan national team member Chou Po-chen. Chou, a 1.98-meter forward who also came from Song-shan High School, was picked second by Kinmen Kaoliang Liquor, with 2.02-meter Lee Te-wei picked third by Taiwan Mobile.

Under regulations reached between Taiwan's university athletic governing body and the Chinese Taipei Basketball Association, only two of the 11 draftees will be able to play in the SBL next season.