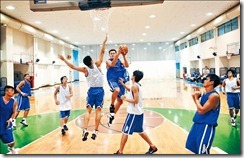 Taiwan NT opened its training camp for the Guanzhou Asian Games Tuesday in Taipei with Chang Chih-feng and Cheng Jen-wei withdrew from the team due to injuries.

The 16-man team is now down to 14 players. Only 10 players showed up for the first practice Tuesday, however, according to the Liberty Times.

Lin Chih-chieh returned to Zhejiang, China to be with his club. Tseng Wen-ting and Tien Lei were absent for personal reasons. Chou Po-cheng was in China for training with his NTNU unversity team. Point guard Lee Hsueh-lin did attend the practice but will join Beijing Ducks on Sept. 25 to prepare for the new season.

Taiwan NT is scheduled to leave for China early October for a warmup series in which it will meet CBA teams, including Beijing, Liaoning and Bayi. Head coach Zhang Xuelei said the team will play at least 10 geames in China before returning to Taiwan on Oct. 20. Lee and Lin will join the team afteer Oct. 20, Zhang said.

Zhang said that the "Big Four" of Tseng Wen-ting, Tien Lei, Lin Chih-chieh and Wu Tai-hao will make the final roster as well as three guards including Lee Hsueh-lin, Chen Shih-nian and Hung Chih-shan. Which means that the other players will have to fight for the remaining five open spots, Liberty Times reported.

Zhang said he was glad to see Wu Tai-hao, who has been rehabbing his left knee since April, is returning to form. The first phase of the training camp from Sept. 21 - Oct. 4 will focus on conditioning, he said. He will try to come up with the best roster during the second phase in China before the final phase in Taipei.

"We will bring our best team in its best condition to Guzngzhou, " Zhang was quoted as saying.