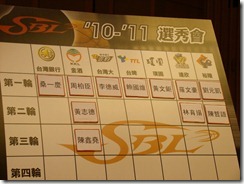 You can see a little bit of everything that went wrong in Taiwanese basketball in the annual SBL Draft, which took place Sept. 1 in Taipei with as little fanfare as you can imagine.

Sang Yi-ching, a 19-year-old 195cm university sophomore, was selected by Bank of Taiwan as the No. 1 pick in the draft. In all, 11 of 23 applicants were selected in the 20-minute draft that did not create any buzz nor much press attention.

It shouldn't have been like this, considering that Sang has led his high school Song-shan High School to the HBL (High School Basketball League) championship and was named the MVP before helping his university -- National Taiwan Normal University -- to its second consecutive UBA (University Basketball Association) title and now being named as the top SBL pick in the span of 18 months.

The reasons why Sang's story and the draft were literally overlooked, under-reported and insignificant are because:

1. Sang couldn't play for Bank of Taiwan in another three years due to a special regulation as do other draftees. Only three of the 11 newcomers can play in the SBL next season. We'll get to that later.
2. There are not too many players SBL teams can choose from. Most of these players are not SBL-ready.
3. The seven SBL teams do not exactly need new bloods because of their loaded rosters.
4. Unlike the NBA or other leagues in Asia, the SBL does not market the draft at all. The draft is not a significant and marketable event in its eyes. Actually, it probably isn't.
5. Believe it or not, most SBL teams do not appreciate the idea of a DRAFT in the first place.

The craziest part of the SBL draft is that most of the selected players can not play for the teams immediately, and that's why teams have been lukewarm about the draft.

Traditionally, men or women, college players dominated the player pools in Taiwan. Things were the same even with the existence of a true professional league -- the CBA (Chinese Basketball Alliance) from 1994-1999. Only about 50 percent of Taiwanese players, at best, could be seen as full-time pro players. The majority of them are student athletes in colleges.

In other words, there's not much difference between AMATEUR basketball and PRO basketball in Taiwan because most players in the pro or semi-pro leagues are college students, who are supposed to be amateur.

While some players played for the pro teams and their college teams at the same time, some played exclusively for pro teams. For those who played both ends, they apparently focused more on the pro game and tanked in the college competitions. It was probably what they had to do especially when the pro season and the college basketball season overlapped.

Universities were not happy that these players with athletic scholarships spent much of their energy playing for pro teams and got paid, rather than representing their schools in the UBA.

Chinese Taipei University Sports Federation (CTUSF), the university athletics governing body, has been desperate to change that. It worked out a four-year deal with the Chinese Taipei Basketball Association (CTBA) to phase out the abnormality.

For SBL teams, they will have to make sure the player they pick is worth the wait. In Sang's case, BOT will have to wait until he graduates from college in 2013 to have his service.

Some argue that the draft is meaningless because these team are selecting players ineligible to sign. And these players can not help them on the court anyway.

The draft system was established in aims of balancing the talent gap between top tier teams and the bottom-dwellers. However, teams with large budget, like Yulon Luxgen, are against the draft privately since they recruited -- and paid -- prospects as early as the players were in high schools. Women's teams in Taiwan even started paying young players in junior high school. Naturally, a fair draft system is the last thing they want, because it keeps them from tying up all those young talent.

Take Chou Po-chen, who was drafted by KKL in this year's draft, for example. Rumors said Chou, a university sophomore who made Taiwan NT roster this year, was going to sign with Yulon. Chou mysteriously disappeared from the draft on Sept. 1. According to a KKL coach, who attended the draft ceremony, Chou did attend the draft but he was escorted away by staff member of Yulon, which obviously did not like the idea of seeing its recruits to accept team jersey from opposing team and pose for photos.

Team representatives have been complaining about the lack of a "system" in Taiwanese basketball for years. Now that the CTBA tries to establish a system, and guess what these teams say and do? They don't care about the future of the league nor the miserable attendance record. All they want to know is whether they can get any player they want and pay him less.

Have you found anything interesting? Yes, Bank of Taiwan, the perennial laughing stock of the league, have occupied the No. 1 top pick spot for four straight years thanks to its dismal records. Three years later, Wu Fong-cheng has transferred to Yulon and Chen Kuo-wei has had only limited contribution. I'm not sure where Doug Creighton, who I think very well deserved more playing time in BOT, will play next season.

A total of 57 players were selected in these drafts. I wonder how many of them are eligible to play in the SBL and how many of them were actually signed to a contract. Less than 10 percent, maybe.

So, does a draft system functional in Taiwanese basketball? It appears that the answer is negative. However, I argue that the system should be kept in place so teams will have a level playing field and the rich teams will not be able to collect all the good players.

On the other hand, if small-budgeted teams like Bank of Taiwan -- Yes, this bank prints bills, but this team doesn't have money -- doesn't try to do anything to improve itself, it will keep losing players.

It's the same for the SBL, which has done too little to advance the league since it's established in 2004 with a hope of reviving Taiwanese basketball. The SBL teams need to stop being selfish and start supporting and implementing everything that's good for the development of the league and local basketball before it's too late.

Feel free to read these posts below if you would like to know more about past SBL draft.