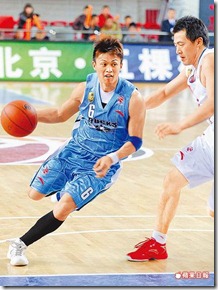 Hsu, who spent most of his career with Dacin, will be returning to his old team and replace Chiu Ta-tsun, who left after the season to coach in China’s Jiangsu.

According to Wang, the team had planned to hire South Korean veteran coach Chung Kwang-suk but was concerned about his communication with the players, since Chung does not speak Chinese Mandarin.

Hsu made his coaching debut last year with the KKL and finished with a 14-16 record.

The 37-year-old would have no problem communicating with his players, given his familiarity with the team.

Dacin made six Finals appearances in the SBL’s 9-year history but finished with only one title in 2009. After that, it has lost in three straight SBL Finals to Yulon, Taiwan Beer and Pure Youth.

National 2nd team head coach undecided
The CTBA has not made the final decision on who would replace Chiu Ta-tsun as the head coach of the national second team in the William Jones Cup in August.

Chiu was tapped as the head coach of the team but left for China to coach in Jiangsu.

According to the CTBA, Taiwan Beer assistant Chou Jun-san will be the first candidate on its list, rather than Hsu Chih-chao, who left KKL to coach Dacin, because the invitation list was arranged according to the final SBL ranking, starting from the runner-up Dacin.

If Chou declined the invitation, the CTBA said, it will target assistants of Yulon Luxgen, which ranked fourth last season.

Lee became the first Taiwanese player to win the award in China.

Lee averaged 11 points, 4.6 rebounds and 3.4 assists in the five-game series, which paled in comparison with Stephon Marbury’s 33.4 points per game, but got the nod as Marbury is not qualified to win the award as an import player.

Taiwanese players are not considered import players in the CBA.

As for why the award was announced almost three months later, the league did not provide an explanation.

The 175cm point guard is in Taiwan NT’s training camp.