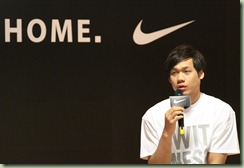 With Chen Hsin-an and Lin Chih-chieh off to China already, more players are expected to leave Taiwan and play in China's Chinese Basketball Association and hurt the popularity of the domestic league even more.

According to media reports, Lee Hsueh-lin of Yulon, Chen Shih-nian of Taiwan Beer and Su Yi-chieh of Dacin are all considering to relocate to China next year, which means the SBL is in danger of losing three starting point guards.

It appears to me that all of them are going because they've been in talks with Chinese teams already with the assistance and consultation of Taiwan Beer marketing director Chen Jian-chou, aka Blackie.

There's no stopping them from going since thier contracts with former teams were up and are free agents.

Given the increasing gaps, in terms of size and financial capability, between the SBL and the CBA, most Taiwanese players would love to play in China to make more money if somebody showed interests. However, I think neither the CTBA nor the seven SBL teams want to see their better players leaving Taiwan.

After seven years, there are still many problems haunting the SBL, including management and marketing for the seven teams and the league, inconsistent officiating, the venue issue, the lack of sponsorship and decreasing interests of local fans.

The SBL and these teams have only themselves to blame because they always spent time to argue the little things rather than sitting down to discuss the vision, plans and future of this league. I love to describe them as street vendors who try to make as much as possible here and there and don't think about tomorrow, instead of serious owners who want to build a brand and a business that lasts 100 years.

Saving money has always been their No.1 priority as well. Hiring extra guys? Salary promotion? Building practice facilities? You can just forget them all.

However, these guys figure that since the SBL is the top domestic league and basketball has always been one of the top two sports (baseball is the other), they can ask for a high price with the TV stations on broadcast rights. But the only reason for ESPN Taiwan to sign the right is to fill up its airtime. That's all.

To solve all these problems, Mao Kao-wen, the newly-elected CTBA president, has to make things happen. After all, CTBA is the driving force behind not only the SBL, but also the development of Taiwanese basketball. But it has been incompetent and dysfunctional for most of the last 20 years.

This will be the first time in the last 20 years that the CTBA president does not own a domestic team, so I guess we can at least have some neutrality here.