-- Yulon, the only team that does not hire an import player and the team that said is to "make the playoffs" at the start of the season, is now looking at its 4th SBL titles in team history.

-- These teams had played 8 games in 10 days. What kind of stupid postseason schedule was that? You can only find this in Taiwan.

-- It appeared that very few people are paying attention to the SBL Finals, which is supposed to be the best basketball competition in Taiwan, with less than 1,000 fans at each game.

-- It appeared that the players and the management thought that the only thing they should do is playing ball when only one of four head coaches attended the pre-postseason press conference two weeks ago. They didn't even bother to talk to the media. 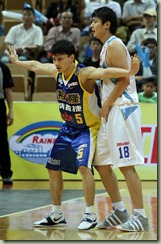 Tien Lei missed one of two free-throws with 2.8 seconds left as Dacin missed an opportunity to tie the game and lost to Yulon 72-71 in Game 3 of the 2010 SBL Finals.

Chen Chih-chung had 24 points, 5 rebounds and 4 assists for Yulon while Yang Che-yi had 11. 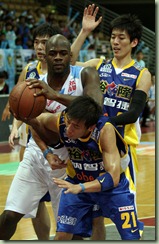