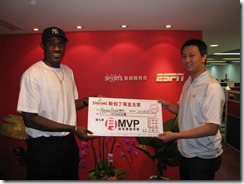 Taiwan Mobile forward Alexus Foyle was named SBL MVP for the month of April despite he has finished his contract with the team, which did not make the playoffs.