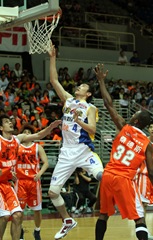 Yang Ching-min made a game-winning three at the buzzer as Taiwan Beer held on a furious rally and beat Dacin 67-65, grabbing a 2-1 lead at the best-of-five SBL first round playoff series.

TB, which led 44-27 at the half, watched its 17-point lead evaporated in the second half as Dacin, led by import Byron Allen and Tien Lei, staged a strong comeback bid. Allen scored on a putback off Tien's miss with 10.9 seconds to go to help Dacin lead by 65-64, its first lead after the first quarter.

Yulon center Tseng Wen-ting walked out from the slump and had 20 points, 10 rebounds and 4 assists in the most important game of the series. Lu Cheng-ju had 19 points. Chen Chih-chung had 14 and Lee Chi-yi added 10.

PY was once again led by James Mao, who had a game-high 24 points and 6 rebounds, and Jon Sanders while other players were completely shut down by Yulon's defense. Sanders had 23 and 10.