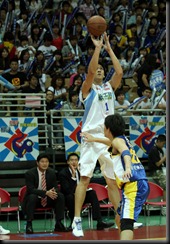 Tien Lei had 11 of his 20 points in the third quarter and Dacin received huge support from its backcourt as the Tigers won Game 5 89-76 Saturday in the 2010 SBL Finals and kept their title hopes alive, now trailing Yulon 3-2.

With its back against the wall, Dacin opened the game 11-3 and never looked back, leading 38-32 at the half. Byron Allen had to spend the entire third quarter on the bench due to foul troubles but that was not a problem for Dacin.

Tien had two three-pointers in the decisive third period as Dacin led by as many as 14. Yulon's comeback bid was put off by Huang Bao-tse's three and Allen's three-point play in the final quarter. he Luxgen was never able to pull within seven points. 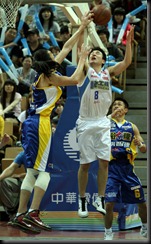 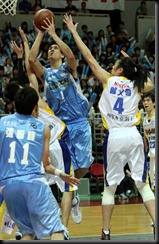 Chen Chih-chung scored 17 of his game-high 27 points in the first half and led Yulon Luxgen to a commanding 3-1 series lead after a 87-81 win over the defending champ Dacin Tigers. Dacin had a 12-4 spurt to close the gap to 79-76 but was unable to make the final push.