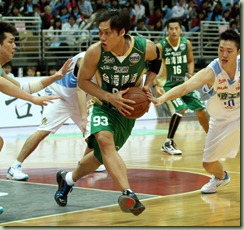 Taiwan Beer came out and shocked defending champ Dacin in the opening game as Derek Stribling scored 8 of his game-high 26 points in overtime. TB also forced Dacin to committ an eye-popping 25 turnovers.

Yang Ching-min had 17 points for TB and Lin Chih-chieh came off the bench to score 14 points in his first game in Taiwan this season.

Dacin was led by Tien Lei's 24 points and 7 rebounds and Byron Allen, who had 18 points and 17 boards. Lin Yi-hui added 16 points. 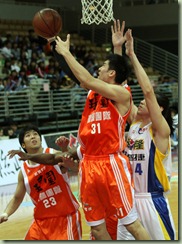 Yulon used its balanced-scoring and always brilliant defense to contain Pure Youth's perimeter shooting in Game 1 of the semifinal series.

Yang Che-yi scored a team-high 16 points and Lu Cheng-ju had 13 points. Lin Kuan-lun scored 15 while Chen Chih-chung had 11 points and 8 rebounds. Center Tseng Wen-ting turned in 13 boards and 5 assists but only had 8 points on 4-of-14 shooting.

Pure Youth was led by James Mao's 19 points. Jon Sanders had 17 points and 20 rebounds. Chien Chia-hung also had a double-double of 10 points and 10 rebounds.

Dacin broke the game open with a 18-5 run in the third quarter to tie the series at 1-1. Tien Lei and import Byron Allen scored 17 each and combined for 20 rebounds.

Chang Chih-fung and Su Yi-chieh had 15 points respectively for the winner.

TB lost its steam in Game 2 as Derek Stribling scored 16 points and Lin Chih-chieh, who dominated the ball too much in the game, had only 11. No other players scored in double-figures.

Pure Youth made 9 three-pointers in the game and limited Yuon to 6 points in the second quarter to tie the series at one game apiece.

Jon Sanders paced PY with 25 points and 18 rebounds while James Mao had 19 points and 8 boards.

Lu Cheng-ju led Yulon with 15 points. Tseng Wen-ting struggled again. Tseng, widely seen as the league's best center, had only 8 points and 9 rebounds on 4-of-15 shooting.