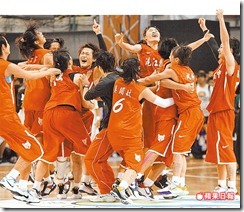 Chang scored 31 points in the first half and single-handedly paced her school throughout the entire game. She won the MVP by averaging 34 points, eight rebounds and three steals in two games in the Final Four. 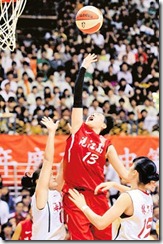 Chen Chung-wei had 22 points and eight boards for Hu-jiang, which coincidentally also defeated Hai-shan 77-62 in the third place game last season for the school's best finish at the time.

Chang, who idolizes Rajon Rondo of the Boston Celtics, was 16 of 27 from the field, including 14 of 22 from the two-point range, and eight of nine from the free-throw line in 39 minutes Sunday night, played down her scoring record, saying that it was the championship that matters.

Hai-shan, which had won three straight titles from 2006-2008, missed out on its opportunity for the fourth title in school history. Its "Twin Centers" Huang Hsiang-ting had 23 points and 9 rebounds and Wang Wei-lin tallied 13 points and 11 rebounds. Point guard Chen Yen-yu had 17 points.

There was another upset in the third place game, where Jin-ou High School overcame a 14-point deficit to knock down defending champion Tamsui High School 57-56 to secure its best finish in five years.

Jin-ou, which was out of the final eight last season to see its consecutive final eight appearance record end after 21 years, also snapped its seven-game losing streak against the mighty Tamsui.

The defending champ, which led 35-21 at halftime, engaged in a dog-fight with Jin-ou in the final minutes but failed to make a basket in two possessions in the final 26.1 seconds.

Having won six titles, Jin-ou was once the most powerful team in high school women's basketball, but it was unable to win one after 2004.

Tamsui's Lin Yu-ting, the freshman of the year and the MVP last year, had 20 points and 12 rebounds.