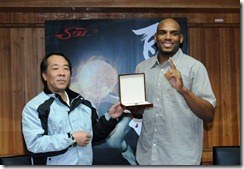 Pure Youth forward/center Rashad Jennings was named SBL MVP for the months of December and January.

Jennings is averaging 16.8 points and 21.8 rebounds for the season. He established the SBL single-game rebounding record with 33 in the Feb. 13 game against Taiwan Beer.